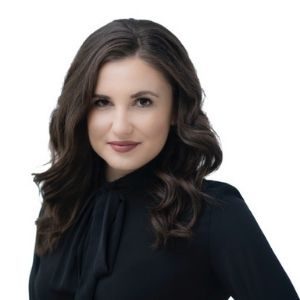 Antonia Hristova is an Articling Student at Avanessy Giordano LLP. Antonia is a graduate of the University of Windsor, Faculty of Law. Prior to law school, she received her Honours Bachelor of Arts degree in Law & Society and Human Rights and Equity Studies from York University, where she graduated with distinction. She is a member of the Golden Key International Honour Society, awarded to the top 15% post- secondary students. She was a panelist at the 2016 “Social Justice for All Human Rights in the Age of Surveillance” Symposium where she presented her year-long research on the Ontario welfare system.

While in law school, Antonia was a Mentor in the Windsor Law Mentorship Program, a Co-President of the Environmental Law Society and a Committee Member of the Women and the Law National Association. She worked at the National Self-Represented Litigants Project, where she assisted self-represented litigants with preparation for mediation and hearings in support of ongoing Human Rights Tribunal of Ontario (HRTO) cases. Antonia participated in several moots including the Hicks Morley Moot and the 2019 Willms and Shier Environmental Law Moot Competition. Antonia completed a summer program on International Criminal Law & International Legal and Comparative Approaches at the Hague, The Netherlands.

Antonia has extensive volunteer experience, including facilitating fundraising events at Sick Kids Foundation and World Vision Canada, as well as organizing cleanup events at Detroit River in collaboration with WWF and Ocean Wise. Outside of work, Antonia is a self-proclaimed foodie and enjoys traveling, watching basketball games with friends and family, and doing yoga.

Our firm has built its reputation on exceptional client service and results. Give us a call today and let’s talk about getting you the professional representation you deserve.

Fill out the contact form to the right if you would like to speak with someone about your case. After you hit submit, a representative from our office will contact you promptly.