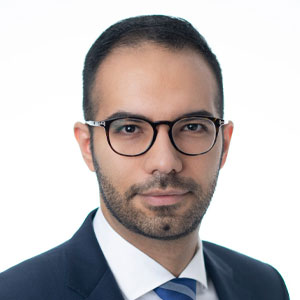 Nima Azizi articled with Avanessy Giordano LLP and was hired back as an Associate. He is a graduate of the University of Windsor, Faculty of Law. Prior to law school, he obtained a Bachelor’s degree in philosophy from the University of British Columbia.

Since finishing law school, Nima has practiced exclusively in the personal injury field and has successfully advocated for injured clients in numerous cases. Nima has represented clients at the Superior Court of Justice, the Licence Appeal Tribunal, and the Social Benefits Tribunal.

While in law school, Nima was involved in various extra-curricular activities, including work at legal clinics where he passionately advocated for low-income clients in court and negotiated favourable settlements. Through his work and volunteer experience, Nima has developed a client-oriented approach and is dedicated to achieving the best possible outcome for every client.

Outside of work, Nima’s interests include playing tennis, cooking, listening to music and going to the gym.

Nima is fluent in Persian.